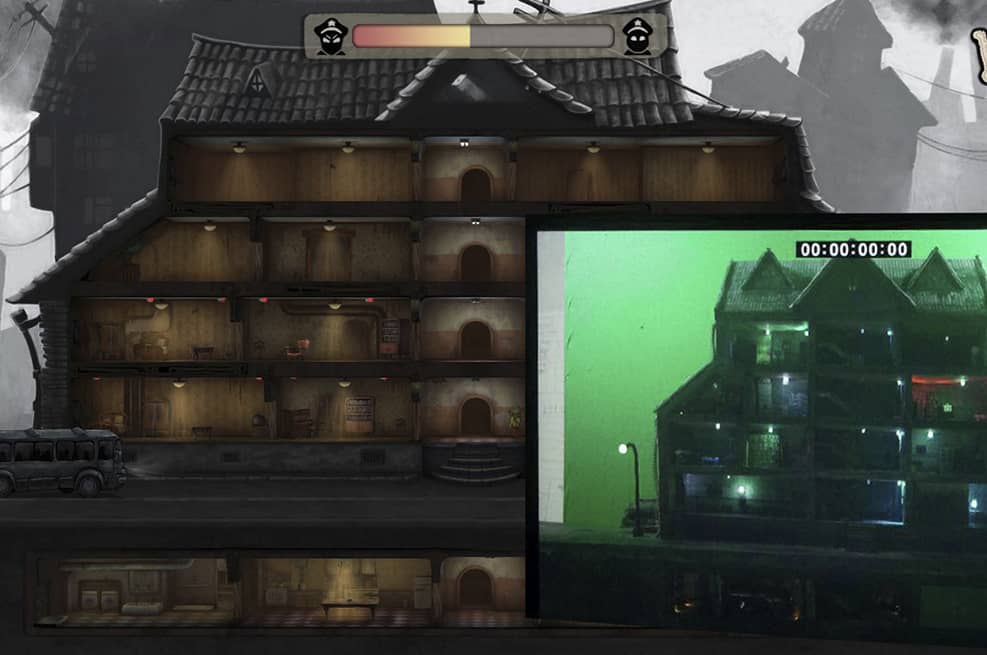 The screen version of the computer game, Beholder, became the second project of the creative duet of Nikita Ordynsky and Liliya Tkach, authors of the short film “Papers, please” that became a smashing hit.

Work on the new movie was, at the same time, carried out in two cities. While in Moscow, there was stage shooting with actors in St. Petersburg, FX scenes were created. At first sight, it may seem that they were executed by method of a computer modeling. However, the key to the trick may be surprising: the objects are real. The creators shared the secrets of the construction of the tiny house and of the flight through a keyhole.

When the work on Beholder started, we made a storyboard and invented the frames with a keyhole and the house. Technically, up until the very end, we did not understand how to make them happen and were looking for a solution. At the same time, Mischa Losev, the head of Scandinava studio, wrote to me, offering assistance in the shooting. We could not miss such a chance and filled him in on the current task at once. Mischa suggested making frames in miniatures. I never encountered such technology before, but agreed as the idea had got me hooked.

Last summer, I wrote to Nikita to tell him that “Papers, please” was an outstanding, utterly amazing work. He thanked me and told me about his new enterprise. The subsequent meeting set specific aims and highlighted the interest in helping each other on both sides. For “Beholder,” it was necessary to make two VFX scenes. The story in the visual sense represents a wild mix of VFX against the background of a bit grotesque film noir. The task was: “to keep the atmosphere of a game, to create a feeling of the system-like city, anti-Utopia.”

“Need to make the model of the five-floor house for the movie. We hand over a ready shot in two months. Are you up for it?” – it seemed that Misha dared me. I was not in a hurry to accept the challenge, but once caught myself twisting and turning in my mind, mentally constructing the house, wanting to touch the envisioned with my own hands. “All right, – I said, I’m in!” – and I never regretted it.

Sheets of penoplex foam of different thickness became a foundation for walls. The material was easily cut with a Japanese sharp knife. Besides, it was light, and the scale-model was supposed to be carried to the set and back to the workshop. I calculated the size on the basis of the shot from the game. In a day, details were sawed and in two days, connected in the construction. At the assembly stage, I worked alone under the close scrutiny of Sima Mikhailovna – the local fluffy curator who was constantly striving to inspect the scale-model from within. 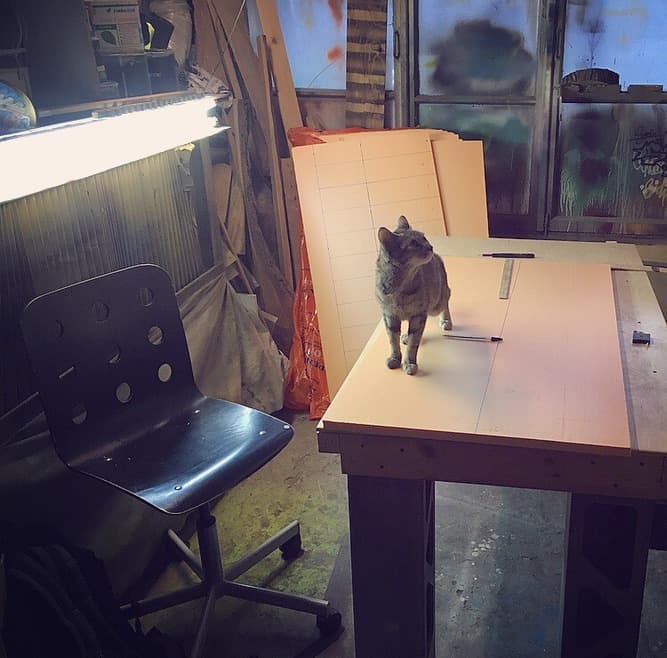 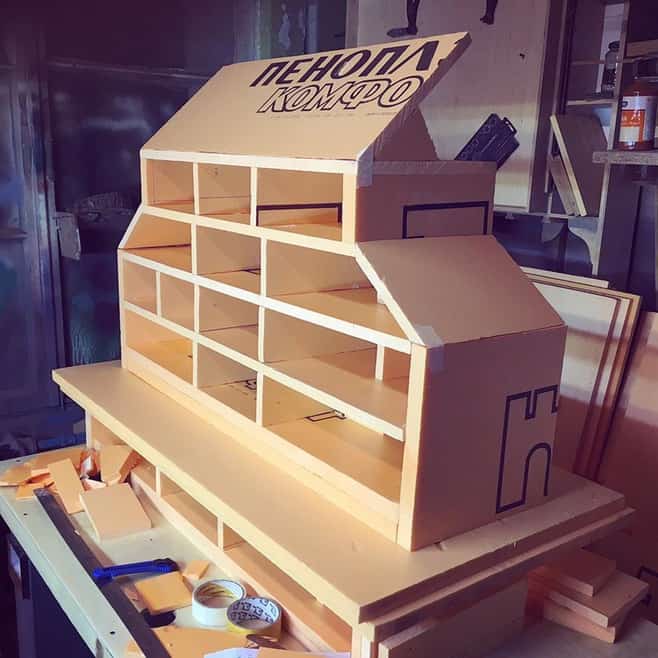 When it came to decor, I called out for help of creative friends. The team of decorators included Maria Dofaminova, Maria Kavadeeva, Daria Radionnaya, and Maria Sharygina. There were many tasks: to paint the cut of the house, to cut the printed invoices and to glue them over the scale-model, to make imitations of furniture and to finish drawing details of interiors, to sandpaper roughness of the plywood steps and to glue them together to make ladders, to make lamps and even banisters which are hardly distinguishable in a shot.

Of course, I could not help putting an Easter egg in the movie: one of the interiors on the second floor imitates the furnishing of my room. I shared the idea with the guys – they were inspired, and many of them hid their own objects in a shot. The viewer, most likely, will not notice them. But we knew there was a bug under a ladder and felt boots on one of the staircases!

At the same time, it was necessary to add lighting to each of the rooms. Being guided by the finished shooting frames and the reference from a game, I drew the map of light. Then I turned to the friend: Matvei has a lot of experience in programming of scenery for game quests. And what we were making looked a lot like a real-life quest.

Once in the evening, I was called by Francheska with a request to create lighting inside the model. She told me that the bulbs had to be hung in the rooms, “what kind of lamps? – It’s up to you.” After that, I got carried away by my imagination, and the ideas of how to make the lighting of the house more interesting were born. My eyes met the small group of LEDs ws2812. For those who did not get the full grasp of the situation, I explained: ws2812 is an address RGB-LED with the built-in shim-controller. It means that having connected only one wire from a light string of LEDs to the controller, I can separately manage each channel of color in each LED in the model.

From this point, the main part of the work began. Tails from thin wires were soldered to LEDs to take them to the back wall of the model, and there to connect them together. The problem was that there were no ready-made plafonds of such size on sale. Having counted proportions taking into account the ceiling, we found out that plafond with a diameter of 10 mm would look the best. The solution was found: we took the average 10mm LED, sawed off the front lens and glued it to our LED so the plafond was ready. 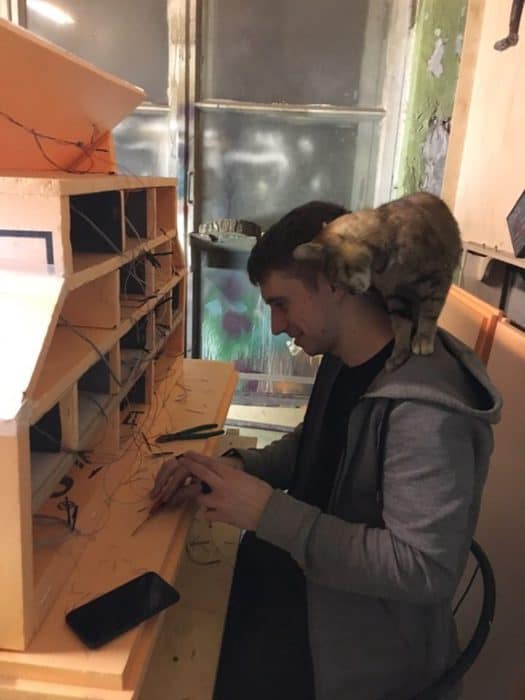 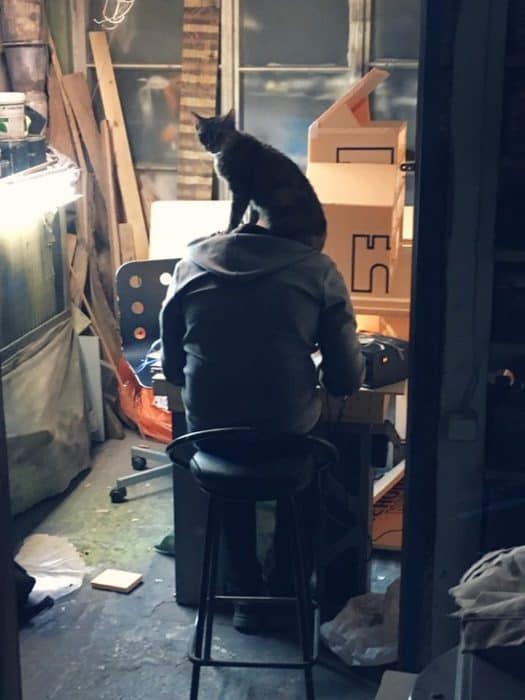 The final step – installation in the model: bulbs were glued on thermoglue, and the wiring was switched behind. Ordinary «Arduino» was connected to all this, and in 20 minutes, the firmware was written.

The next item on the agenda was to show the result to the artistic director. We were stuck at the workshop for the whole evening, the toy where it is possible to set brightness, color, and shades of light in each room according to one’s wish, fell into Misha’s hands. A special effect I set to some lamps was the blinking as if they were fusing. The next day, the shooting began.

On the On the “Beholder” project, the interesting challenge for the cameraman was set: to shoot very slow and smooth crane shot from a house miniature. At once, the idea to carry that out by means of a robotic hand, Kuka, which was available in the studio, came. There were other options for the case of force majeure – the use of a crane or a dolly were considered.

For shooting 4k camera black magic, the fast, sharp lens sigma 18-35, radio focus Tilta Nucleus and playback were selected. Generally, the light was only necessary for illumination of Chroma key which was set behind the miniature. Therefore, only two small Led-panels were enough for us. Other light sources were integrated into the house.

The process of shooting was very fascinating! Several takes were needed to get accustomed to the work with radio focus. Then, shot after shot turned out to be almost flawless. In 4-5 hours, we got many good takes with different modifications on a miniature. If we had used other technologies of crane shots instead of Kuka, we would have spent much more time on shooting.

It was my first time shooting a miniature and I thoroughly enjoyed that experience! I was extremely glad to be a part of the “Beholder” project. 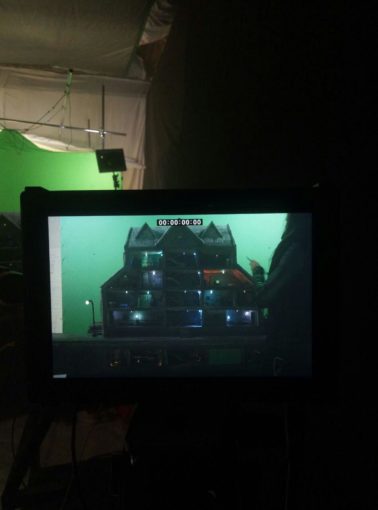 I witnessed the making of the shot with a keyhole accidentally. Before that, I worked with other crews that were also working on Beholder. We were engaged in the illumination of key elements and the drawing of the interior. Shortly after New Year, Misha wrote in our chat looking for the composer for the frame of the movie – the creation of flight through a door. The shot was edited from the very beginning but had no middle section, the interiors of the well itself. That version was done by the editor of the movie, and the flight from rough-cut edit was the simplified version of the final one.

Actually, the idea was clear even then. But there was no beauty in that transition, and that was something that needed correction. That was something that got me interested at the time. Misha’s determination was appealing: the authors were ready to include the version of the film editor into the final edition, and Scandinava was only assigned the task of making the final result better.

In the pavilion, a small construction from wooden bars and sanitary elements was built and put opposite a green background. Construction bore no resemblance to the interiors of the real castle, but it was not required as Misha explained to me. “The main thing is to create the feeling of transition to another, unfamiliar space.“ And the final material met the expectations. The pocket camera Sony “drove” inside the construction, which made the small set look giant, taking over all the space of the frame.

In reality, that proved the indisputable advantages of practical effects on the finished shooting material, everything was almost ready. Each element was where it was needed. The only thing that had to be done was the connection with the next two elements of the shot aside and the removal of the roughness of the initial material. And there was, alas, plenty of them. Shaking of the camera became a paramount barrier. It was impossible to get rid of it entirely in such conditions of shooting. All panning (750 frames from which about 400 went to the final copy) was accompanied by distinguishable stirring. It would have destroyed the illusion of breadth. 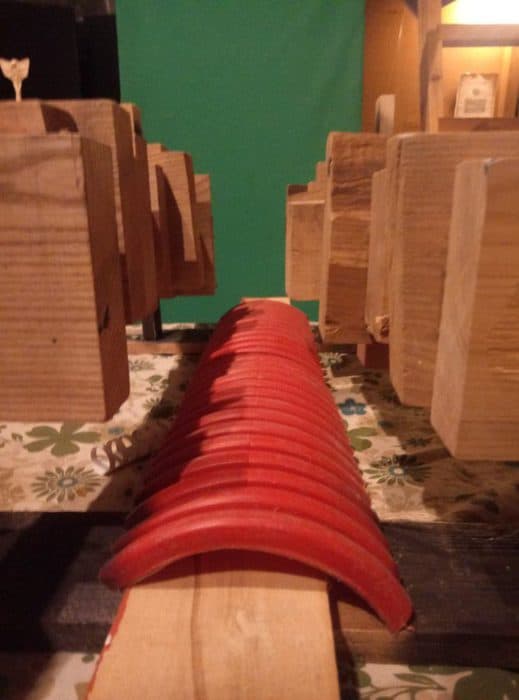 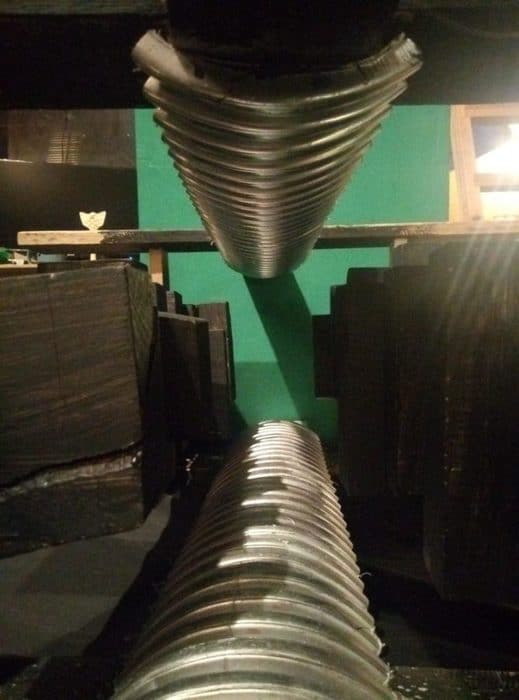 Difficulties in stabilization were added by a strong change of lighting as on entrance and departure from construction there was an overexposure, and in the “well” itself, it was rather dark. It made the tracking complicated. The solution was laborious but efficient: by means of planar tracking, each of visible sides of the well (the upper groove, the bottom, the right side, the left side) was stabilized then it was imperceptibly sewed on a soft mask. Despite the existence of the green screen, overexposure made a keying very painful, and the decision to use an “antiquated” method was made. As planar tracking was already made on all shot, using it, I received an alpha by means of a normal rotoscoping.

There were only a few things left: the source was required to be started up in the back wind, to reflect it in a vertical direction and to make the general contrast higher. The first was necessary as initially, the camera drove deep into scenes, and according to the logic of a frame, had to drive off back. The second and third just made the result more beautiful.

The only thing left was to glue it together with the interiors of the room and a view of the door handle. The scene with it was shot statically. The panning out was made by means of program scaling. Anyway, it all came together and is possible to observe in the movie. 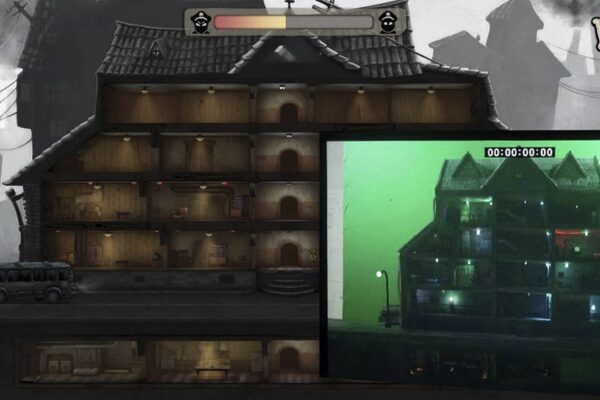