Moscow FX-makeup artist Nory Turks who has a bright appearance and quite unusual name is no less remarkable for her works themselves: there are silicone masks of fantasy monsters and bizarre creatures, prosthetic makeup and all sorts of props. Nory told us why she chose studying in Prague instead of America, how the law degree helps her to do makeup for TV series and why working in horror-quests is more exciting than in cinema production. 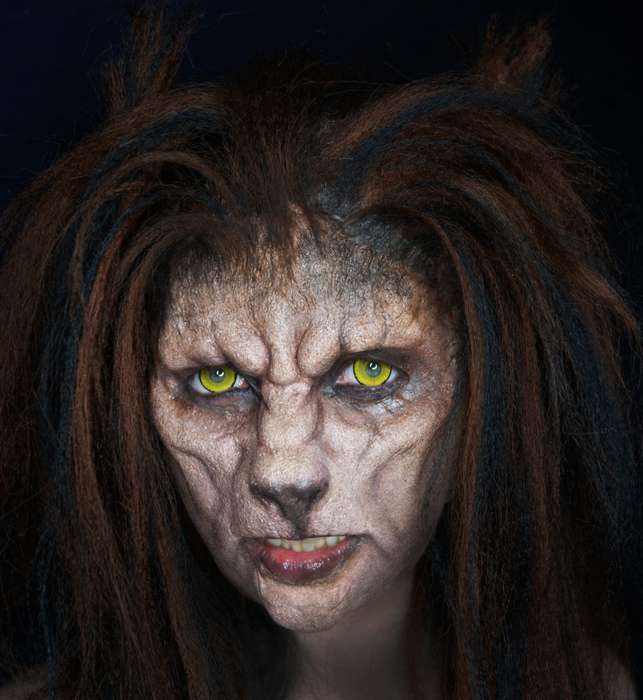 What is your profession and what do you do now?

I’m a lawyer by profession, but it was my parents’ choice. I didn’t enjoy it at all. As a result I quit and immersed myself in art: at first sculpture and dolls. Now I make props, masks, setting for quests, prosthetic makeup for filming.

How did you get to doing prosthetic makeup? Where did you learn how to do it?

Initially I’m self-taught. There’s so much information available these days, that you can learn to do whatever you want if you have such desire. I tried on different makeup looks and posted it on Instagram. At some point my future mentors Vlad T. and Josef R. discovered it. They were following my page, and I was over the moon, because they were famous professionals who worked for Hollywood, Netflix and Amazon! During last year’s enrollment period at the fx makeup school Joseph wrote to me: “Come to Prague to attend our course!»

I was saving money to go to the USA and study in a famous school of makeup and visual effects. As it turned out, the main focus of the learning process was attending meetings with famous professionals of film industry, where they shared their experience. A lot of talking-not enough practice. Twenty four students attended the classes, that’s why it was impossible to pay attention to everyone.

There were only six students attending Vlad’s course. The learning process took place in the workshop, all the supplies were provided. Vlad is a wealth of cinematographic stories that happened to him in different countries. He had been on set since he turned twelve. So the choice was obvious and last June I went to study in Czech Republic.

Did the training meet your expectations?

On my arrival I was thinking of exploring Prague in summer. I had full three weeks! But it turned out, that we studied, then had practice. We were told: “Chop-chop, continue working, you won’t go home unless it’s finished.” From the early morning until noon there were lectures: we wrote down everything concerning materials, the recipes.

Then there were lessons on sculpturing in addition to makeup, because it is vital to take into account the anatomy of a skull. Then there was work with latex, silicone, the comparing of various professional makeup brands, baiting of hair, the training on painting techniques. I stood out among other students because I already had experience. Furthermore, I didn’t give up what we had been doing and continued working in this direction after the training. I bought all the material that we had been working with.

What kind of material? Was it silicone or foam?

No, foam-latex. The three-dimensional detail of professional makeup are made of it. They don’t produce it in Russia, and the shipping is such a drag. My friend from America buys it for me. Foam-silicones and foam are way easier to find, but their usability is much worse. In the case of foam-latex there is a foundation of silicone and five additional components, that are mixed in a specific way and then baked in the oven for six hours. This is how the final mix is made.

Is there any work for prosthetic makeup artists in Russia?

In Moscow I usually work at various events, because fantasy movies are shot extremely rarely. Makeup artists in Moscow are required to do nothing but wounds and bruises. I remember the time when I used to do makeup for the series on NTV channel. There is a million of them, but they all look alike to me: someone is getting beaten up, someone is killed. “We need several stab wounds!”- they say. And so I ponder, where and how the character was stabbed.

Remember the lectures on criminology in business school, browse through Internet forums of forensic scientists in order to make the result look more authentic. They value such take on things abroad. Imagine: you are on set of Russian TV-series, and every conversation sounds like this:

“I need an hour for makeup to make everything properly. — “You have twenty minutes! Draw here, we’ll pour some blood over, and it will do!”

And how are things with domestic cosplay?

I worked on Comic Con and Igromir a few times. One day I wanted to make a costume of the character from the movie “Pan’s Labyrinth”. It is technically challenging. For example, how to fix the horns on the head so that they won’t move anywhere? I mounted a plate on the top of the head. The costume made it through the preliminary round. That was the first time I tried my hand at cosplay. I was asked to work that day, and my answer was: “I can’t – I’ll be wearing hooves!”

All in all, it is more interesting to create the character than to actually be in it. After the training the teachers wanted me to present my costume at the festival IMATS in Los Angeles. I prepared for it, but was denied a visa. It was possible, that warm words about “the talented student, that they can’t wait to see again” made the Consul suspicious.

Later on I was invited to Costa Rica. The visa was not needed there, it was my decision to decline the invitation. Right before that I went with my husband to Guatemala on business trip and stayed in Latin America for a month. Right on the first day we were robbed by some thugs carrying guns. We heard shootings right outside our window at night. Let’s say, it was a memorable family trip! Then I was invited to the States again, and again-the visa was denied! They inquired: what changed since the moment of the last denial? I answered with all honesty: “Nothing.” The Consul: “In this case I’m forced to deny again.” 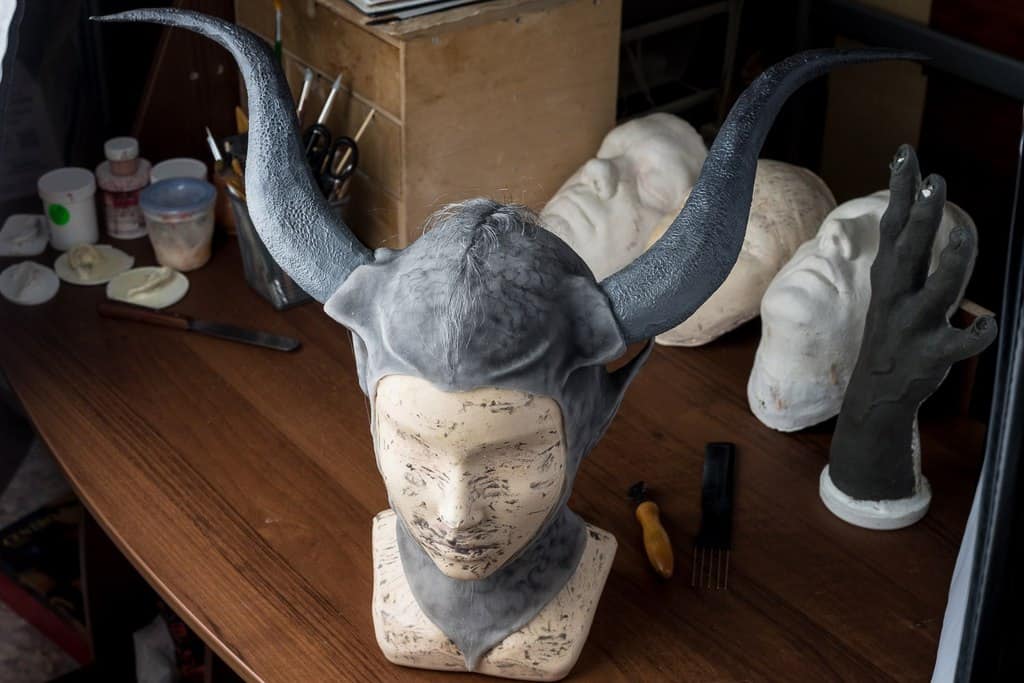 Did you finally figure out what they wanted from you?

Yes, there were not enough trips. By that time I only visited three countries and it looked suspicious to them. On the other hand, when Vlad and Josef invited me to the filming of full-length movie in Prague, I came at once. They told me: “You are going to have three day offs.” “What are you going to do?” – “We are going to work in the workshop, prepare for the festival.” “Count me in!” I spent all the time in the workshop. It was awesome!

Committed filmmakers tend to get minuscule budgets quite frequently. Do you get the propositions of  working for the sake of idea? Do you accept them?

In Moscow I don’t fall for it. But I do it if the job is abroad. You see, there is an international database of workers in film industry. It is vital that your name is in there so you can be recognized and employed. To get in there, you have to take part at least in five international projects. So if the project is international, ask to put your name on IMDb.

What is your favorite project?

It doesn’t have anything to do with cinema. A few years back horror-quests were regarded as a popular pastime. The story gets reenacted by actors with props. You as a part of the group of adventurers solve riddles and look for the exit. The pavilions are styled to look like laboratories of mad scientists, the homes of maniacs, abandoned circuses, etc. I worked on screamer-effects, props and characters of the quest called “The Ogre”. It was closed, but
existed for three years, that is a long time for a quest.

The organizers duties concerning the building of the maze and props, casting were performed thoroughly. I made six corpses to put in the fridge, props of human organs, special effects: rust, traces of spilled blood on wood. It was not just a room, but a fullfledged house: a bedroom, an operating workshop where the maniac sew clothing of human skin, wardrobe, the hallways where the players had to push through the hanging linens. There was a place where the maniac stored the belongings of the people who had been kidnapped-the organizers scoured thrift shops and carefully selected the props. That is exactly the thing that I like most of all-attention to detail.

How did you get the job?

I was recommended to the organizers as a property master that specialized in props for horrors. I did a lot of work of that kind back then. The makeup artists have stages of qualification. It all starts with makeup effects, it is a little more than just makeup, but still is not fx makeup. Then there is a stage of blood makeup, it includes blood itself, wounds, scars-a rather simple stage. Then goes prosthetic makeup.

I was on the stage of blood makeup at the time. They found and invited me. The preparation on my part took a month. No one monitored me, they just trusted me with the task. I remember when I made the corpses and tried to make them hang from the ceiling: imagine me lifting the corpse on leverage and the owner entering the room with excursion. He goes on, like nothing is wrong: “Here is our fridge, there is our property master” I smiled and waved at them, standing on a stepladder, holding a corpse by the rope. That was funny.

At another quest the interview for the position in administration was held while I was working. I sat in the room that was supposed to be a laboratory, poorly lit like for actual quest to give me the better understanding of how it would look like when everything would be ready. A person came to the interview, peeked to the pavilion. I was painting something, facing the wall and blending in it. I turned around, hearing the sound-and saw the poor guy almost fainting.

What can you advise to the people who have just chosen the career in the sphere of prosthetic makeup?

To learn and to invest in their skill. When you realize that you’re good at something, you should try more challenging things. Never refuse a challenge. You shouldn’t compare yourself to others-it holds down a creative person. Sometimes you catch yourself thinking: “Why am I even doing it, when such amazing artists exist, What did I get myself into?” You should only compare yourself with yourself from yesterday.