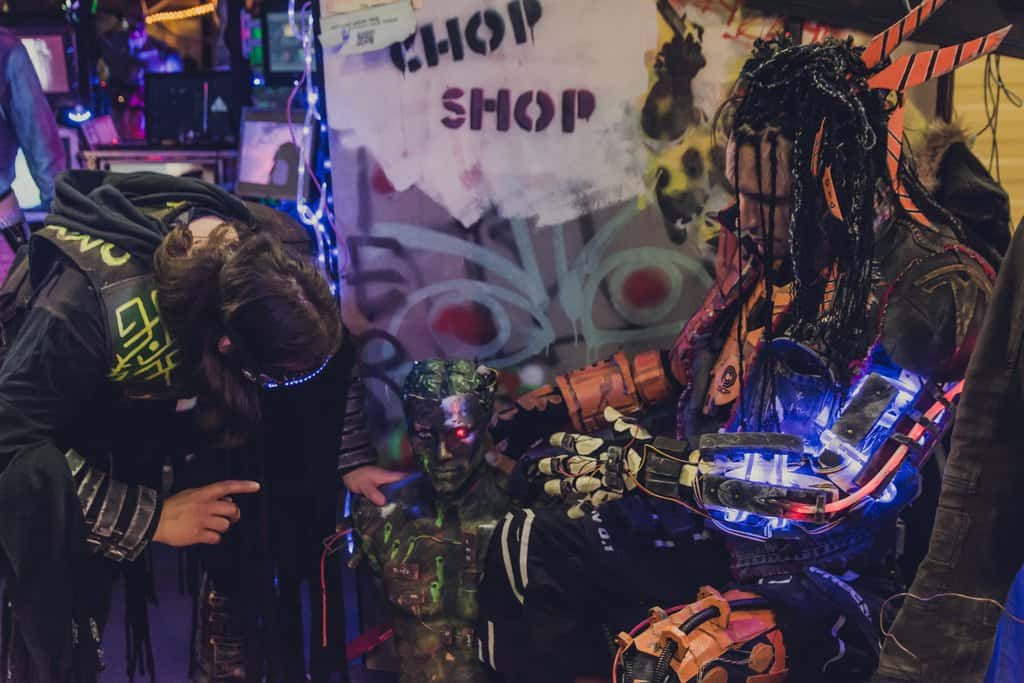 In 2016, a new art space appeared in the small city of Visaginas (Lithuania) called The Art Residence “Taškas” (“The Point” ), hosting artists, sculptors and musicians from all over the world. There are open workshops, a recording studio, a giant prop shop, and, of course, people who create art tirelessly. We talked to five residents about how they “got to the Point.” 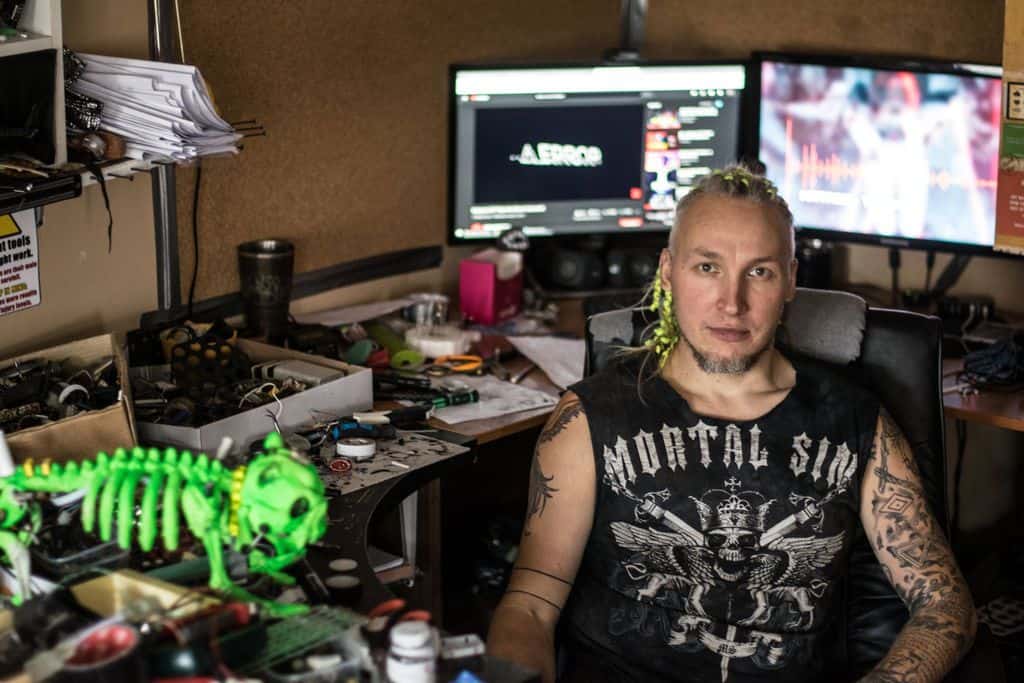 Initially, Tochka was an MG Old School role-playing game club. One day in the fall we got together, and it was not the right season for games. We felt the desire to draw on the walls. I asked for permission from the administration of the Arts Center who basically said, “You are welcome to draw!” and we started drawing on the walls.

They called it “Art Saturdays.” After the fourth Saturday, we realized that we’d like to get together and craft on a regular basis. It was a weekly art happening. We came up with the name “The Point” and began to promote ourselves. 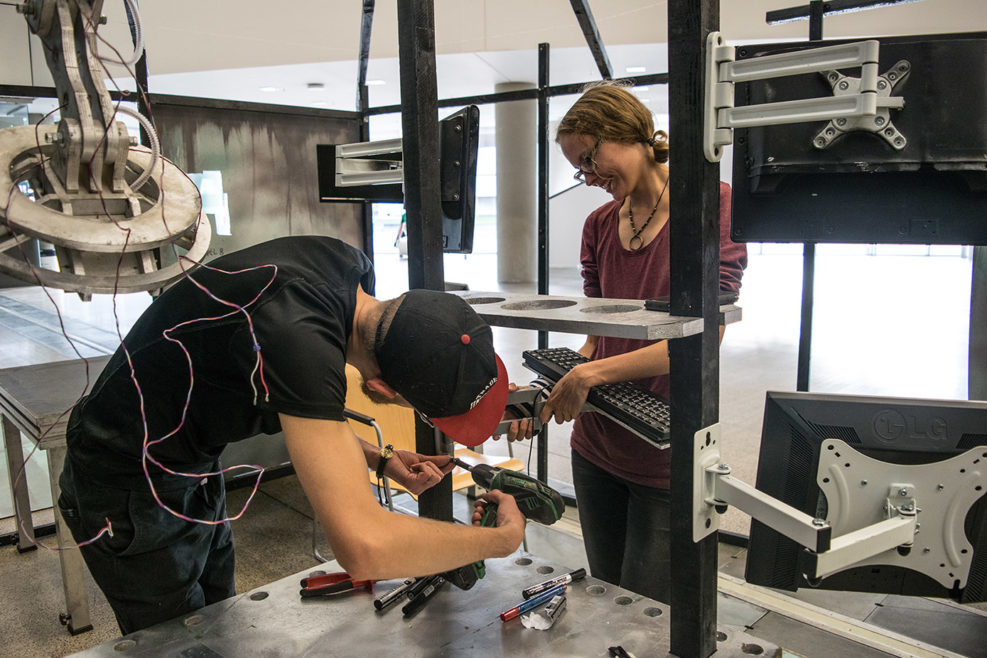 At the same time, I drew the concept of a large youth center for the city: it included all areas and directions of creativity — civilized and wild, punks and chess players. A single center with different themes of corridors. Here you have your own platform, you hang a sign: “10 volunteers are needed,” and easily gather people.

I approached the Director of the Arts Center, where I worked as a teacher at the time. The response was this: “We are not interested in anything. We have other plans for these premises.”

I got angry, went to the Self-government and submitted the project. There was a big presentation. I come back, and the director calls: “You’re fired! Get your things and off you go!” 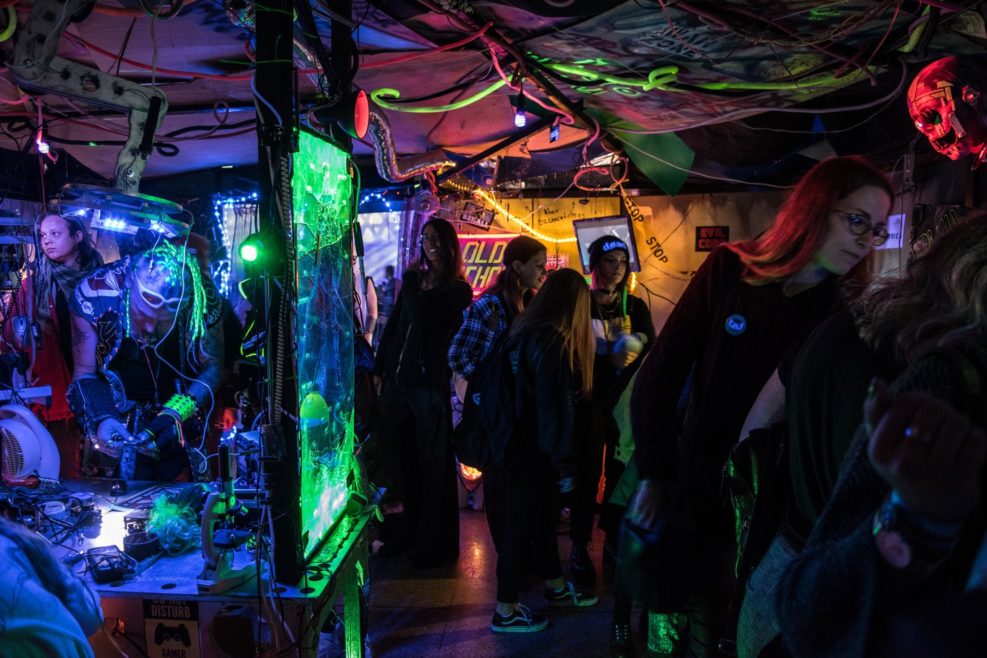 After the incident, we renamed “The Point” to “The Nonexistent Youth Center” and began to organize events to spite everyone. We participated in all the jams, get-togethers and holidays. We were making ourselves visible for the whole year. At some point, I got a call from Eugene Shuklin (politician in the Council of Visaginas municipality):

We were offered an idle 5-storey building. It was empty, dirty, and there were builders on the second floor. “We’ll give it to you for free, but you will have to pay for community services.” I looked at the receipts, and the payment was 3500-4000 euros a year. I was earning at least 200 euros a month. So I got up the courage and signed it. I created an Association and passed the tedious registration procedure. Then I made a request for donation on Facebook and realized that, despite having 2000 friends, my social capital was ridiculously small.

They wrote to me: “Stop screwing around, go find a normal job!” A good friend of mine then made the first donation of €500. We were stunned, of course.

As a result, penny by penny donations covered the first year. “The Point” expanded, but it was more like a hangout center. We didn’t do much crafting, and got the rooms in order instead. Creating a squat wasn’t my goal— I created an art space. It should always be in order. 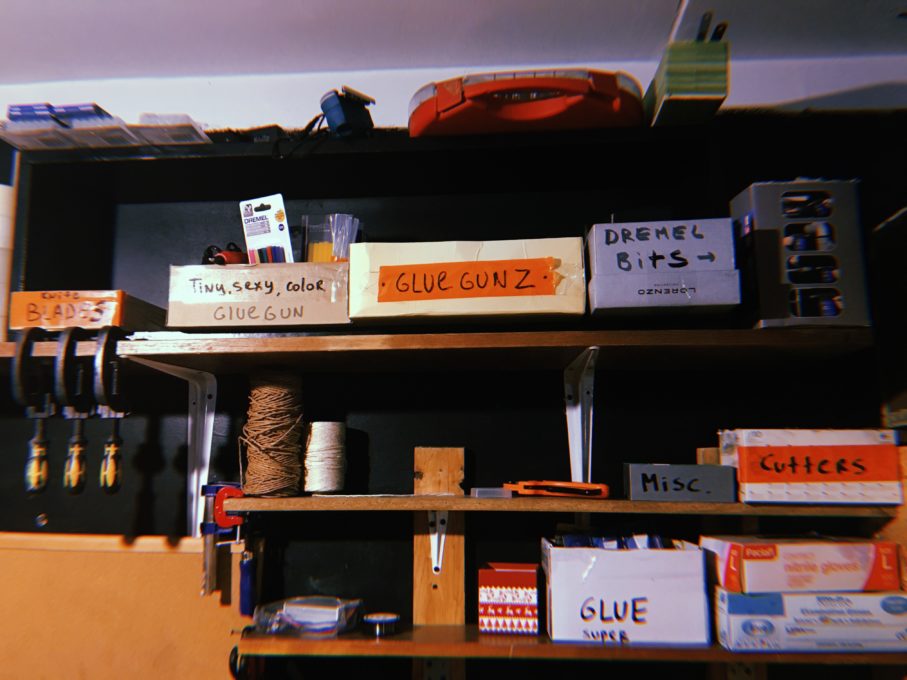 At the same time, we decided to prohibit drinking and smoking here. We discussed it twice with a large company. Once, because after the innovation, no one came at all. You ask people, and they say, “Well, you can’t have a beer with a movie. Otherwise we would come here every day.”

I gathered my people and asked “Well, do we lift the ban?”
Even those who themselves drank and smoked, began to dissuade me: “You will destroy the only citadel of calm and order.” And so it was out of the question. Thus, the place lacks visitors, but does not suffer in quality.

Gradually, I began to earn more. An online store with prints made a breakthrough. My jewelry, dream catchers are now sold in Baltic Shamans. We began to acquire equipment and inventory. I know very talented Visaginas — carvers, painters of miniatures, furtively assembling cool models in the garage. But they say, “Who on earth would care about my work?” This is a mind-block coming from childhood: children were hammered into their heads that art is not an occupation, just a hobby.

My mission is to convey the idea that art implies a huge range of activities and professional environment with the help of The Point, the festivals we participate in and plan to hold in the future. It is ubiquitous and necessary.

I regularly see things from the Soviet period in the trash. Now everything is ruthlessly thrown out in favor of renovation, grooming and minimalism. Imagine: somewhere in the city there is a teenager who dreams of making a movie. Who can offer him anything in terms of props, costumes, and decorations? If the pea jackets and pieces of iron that I am now collecting will not be required tomorrow, but in a few years, this is perfectly normal.

To make a core-cool sculpture, a movie prop, you need to accumulate material and encounter the artist who needs it. And for this meeting to take place, you need the ground: an equipped workshop and a rapidly growing community of crafters. When someone in the city has a creative idea, a desire to play music, draw; our doors are open. 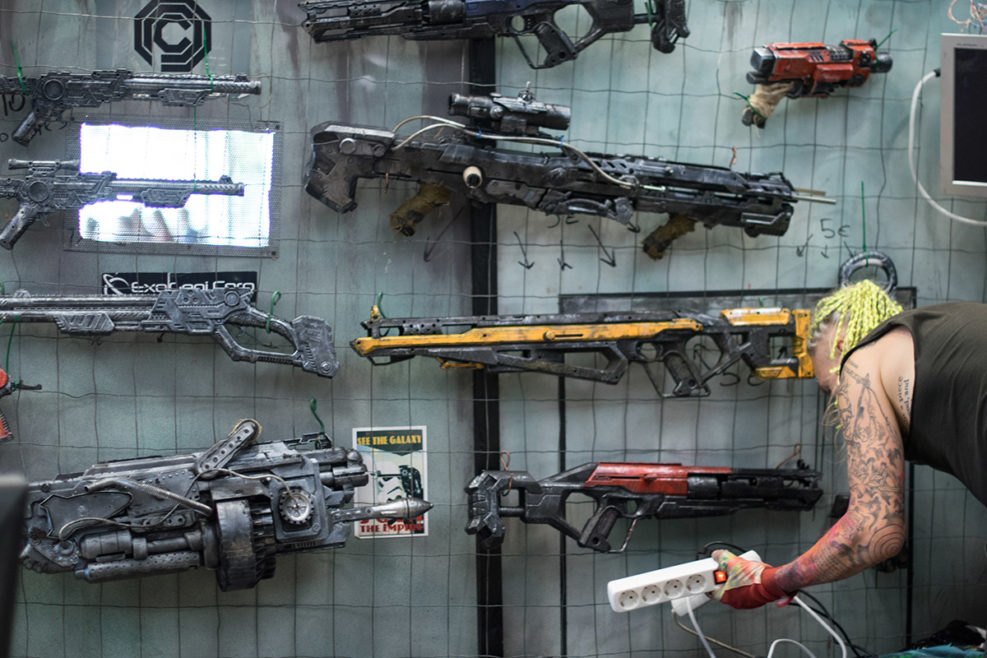 Artists from different countries and couch surfers come here. If a teenager is miserable and has nowhere to go, “The Point” is the place where they come to escape. In a small town, this is priceless. But it also happens that there are no visitors for a week — there is nothing wrong with this. We know that our existence is important to the city, and we maintain the residence as the Indians maintained the smoldering fire. Do you need it every day? No. But when I need to, I don’t want to sit in the rain and re-create sparks. 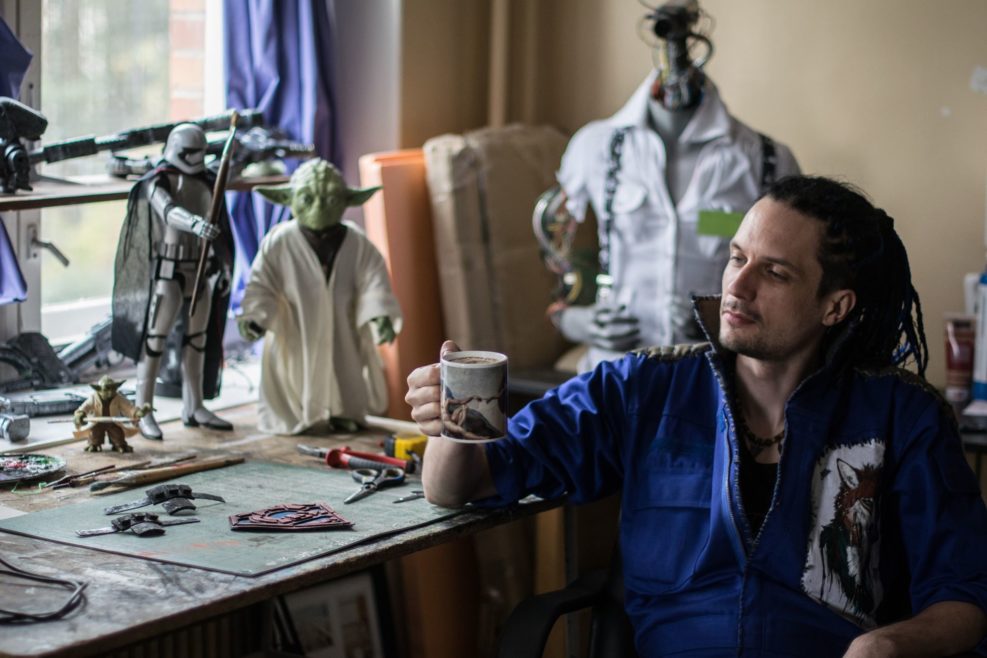 For me, “The Point” is primarily a community of people who live by creativity. Art is not something that you are forced to do, it is born from the fact that a person cannot live without creating. The residence attracts just this sort of people. In fact, there are not many artists who have chosen art as means of living. As a rule, such people have a great thirst for communication with like-minded people. The Point quenches that thirst.

If you want to communicate with creative people, immerse yourself in the atmosphere and see what they
live for, they will be happy to show and tell you everything here. “The Point” does not indicate how to do “the right thing.” Here you can do everything, including doing nothing. But sitting on the couch, you will be a guest. Do you want to become a resident? Come, get inspired and start creating. 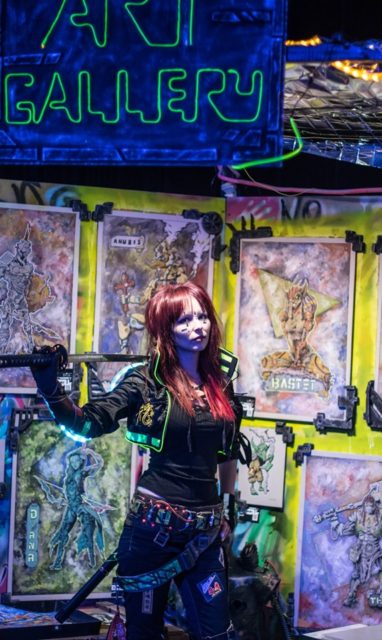 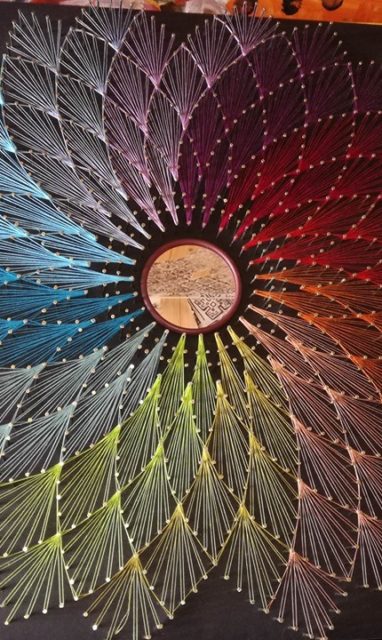 I came to “The Point” with a desire to volunteer and implement my craft. I was assigned a desk on the second floor — the most crowded place in the residence. Frequent communication with guests in English allows you not to lose your language skills. In the course of just one summer, I met absolutely magical creative people! There are also those who call The Point a second home — I, by the way, am one of them. Of course, I’m still new here, but I can say with confidence that the place itself and meeting all these people is the best thing that has ever happened to me. 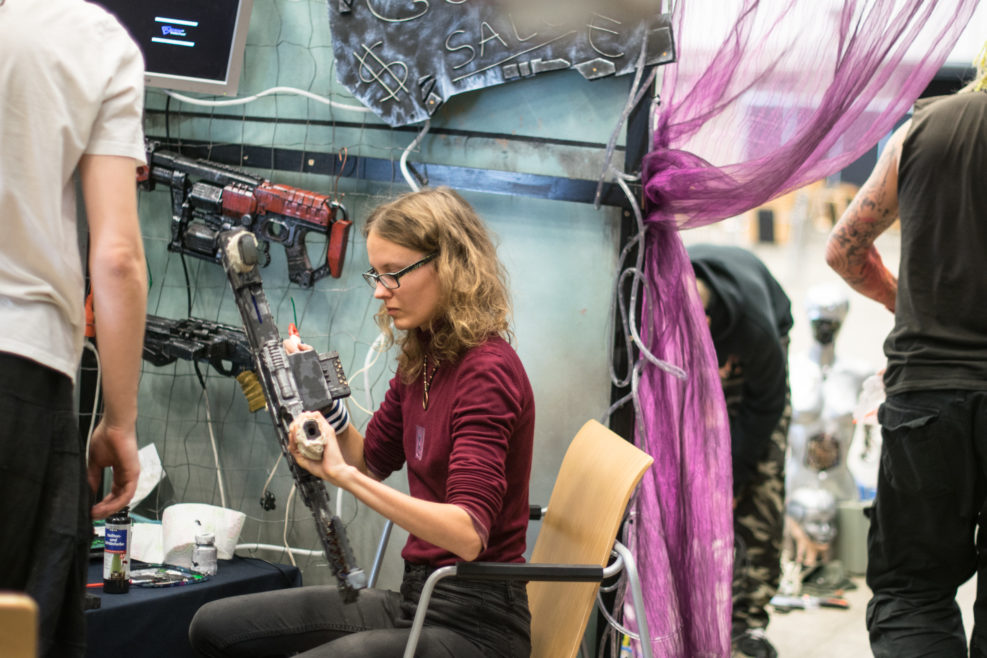 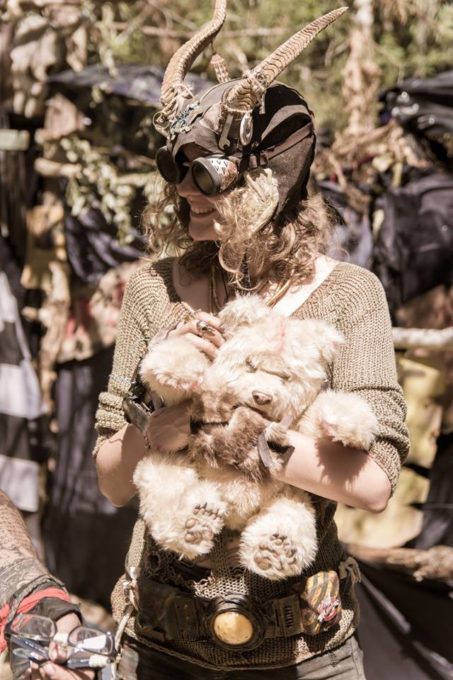 When people ask me, “What is it like to live in Visaginas?” I always say, “I actually live in Taškas Art Residence— and it’s great!” I must clarify: technically, I do not live in the residence, but I spend all my waking hours there.
Over the past year and a half, “The Point” has become my home, a place of growth and discovery, and my refuge. Before I came here, I occasionally drew during lectures and created props in my bedroom. I shudder, remembering those nights when, after grinding putty in a room without a balcony, I went to bed and woke up with bloodshot, itchy eyes. The Point made it stop.

Not only are there many places, where I can create without choking on dust and smoke, I have access to almost any tool I might need. This is just heaven for me! You want to come here at 9 am and leave late at night. The comfort of this place and the abundance of art, creative people scurrying to and fro, serve as a strong motivation for me.

For example, in the last 3 weeks, I created more than in a year before I arrived. And all without much effort — only the magic of the residence and the support of creatives who live here. It’s probably the most useful and magical place I’ve ever known. 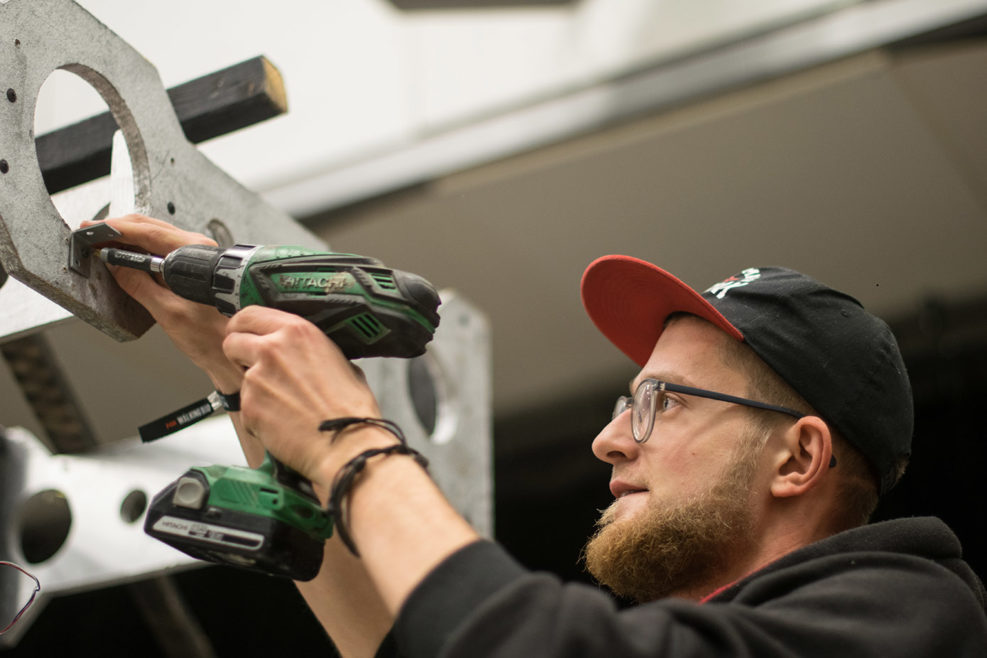 As a child, I dreamed of becoming an entrepreneur, the richest in Lithuania. I also wanted to engage in role-playing games, but Mother forbade my going to to RPG club; believed that it was the place for cultists. As a result, I spent my childhood in front of the computer. I was socially inept, dating and communication came very difficult to me. The idea of entrepreneurship had to be abandoned, and I chose a profession where you need to communicate with people as little as possible. 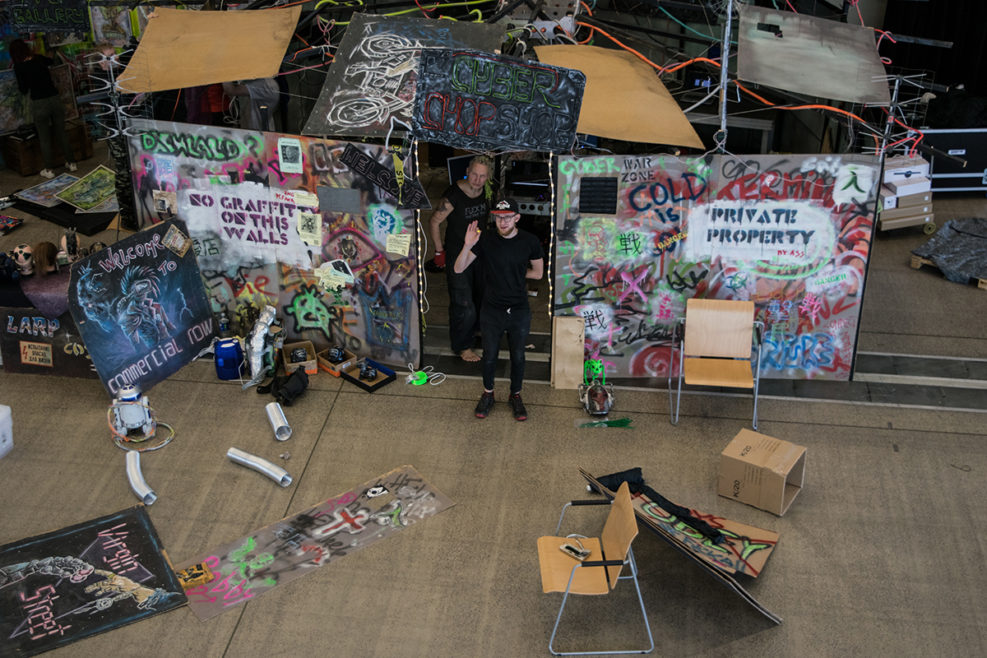 I got to “The Point” as a community at the end of 2013. At that time, I was getting my degree in electronics engineering. Then I decided to fulfill my childhood dream – to engage myself in role-playing games. But I would go to the club and lock myself in the workshop, because it was difficult for me to communicate with people. The first thing I made was a Viking shield made of pallets with a belt. It turned out that in two days I made the best shield in the history of the club! So I got the nickname Blacksmith.

The next product was a mechanical hand made of wood — and again everyone was delighted! Since then, I have started to integrate into the life of The Point. In 2017, I volunteered at the House of Arts. My job was to help Alex. As a representative of The Point, I went to Tallinn and Prague. There were also field trips, promotions, and events. In 2018, I left my hometown for Kaunas. I worked as a salesman, installer of stretch ceilings. I got to know the inside of business, accounting, advertising, and bureaucracy. The job made good money, but it wore me out.

A year later, I returned to Visaginas to study to become an electrician and start working for myself, but I was late for entering the vocational college. While I was contemplating what to do next, I tried working with wood. Loved it. I began to study carpentry, see what people do and come up with my own ideas. I equipped a joinery in The Point and made my projects there. As a result, I decided that my future business will be connected with wood work. 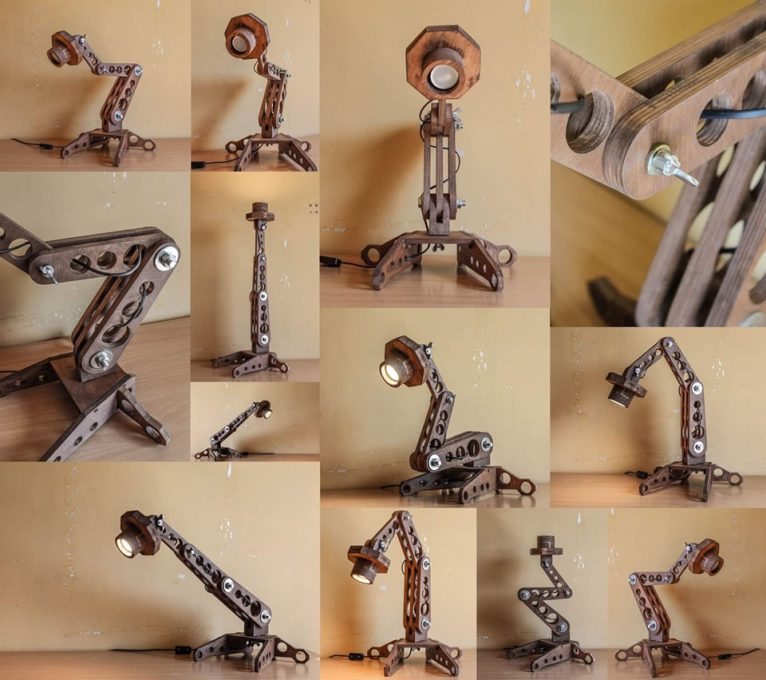 At the moment, I have established a company, found a space, received funding for the purchase of a laser machine, and by the end of the year, I plan to open a workshop. So, thanks to The Point, I am again on my way and moving towards the realization of a childhood dream.